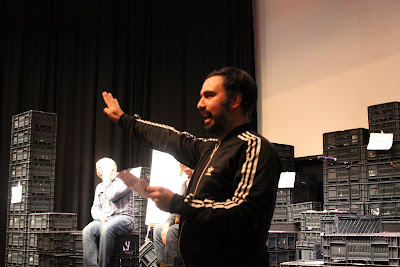 together with Chto Delat? Felix Meritis.Amsterdam/NL

"A two-day symposium on November 4 and 5, 2011 that emphasises the relationship between the waning political and practical imperative of social housing and the broader conceptual or philosophical idea of 'housing the social'.
The second edition of Actors, Agents and Attendants, a series of symposia initiated by SKOR | Foundation for Art and Public Domain.
Given the increasing global conditions of unequal wealth distribution, and the specific urgency brought about by cuts in social and cultural funding in the Netherlands, can forms of cultural production be reclaimed as tools with which to design and defend social space, or are the agents and engineers of such projects merely tools in the further decoration of reduced welfare rights? What do we want cities to accommodate today? What is the legacy of the utopian ideals of the '60s and what alternative plans for living together in cities are being incubated now? How do we deal with the very real problems of social division brought about by poverty, migration, addiction, lack of representation? What roles do artists, designers, architects play in this process?"